A special thank you to Isaiah Morris and AfrikanSpot.com for capturing the momentous evening.

An update since the recent “xenophobic” attacks in South Africa that resulted in the tragic deaths of one Ethiopian, one Bangladeshi, one Mozambican, one Zimbabwean and three South Africans.

The local Durban, KwaZulu-Natal government announced on Wednesday a total budget of R25million has been approved to assist with relief projects for foreign nationals who were displaced during the recent xenophobic attacks.

“There were about 5, 400 African immigrants living at the three temporary shelters in Phoenix, Chatsworth and Isipingo. 1, 200 displaced African immigrants have been successfully reintegrated in the communities in which they had lived previously”- eThekwini Municipality spokesperson Tozi Mthethwa said in a statement.

A high level task team, comprising of KwaZulu-Natal government officials and eThekwini Metro officials, and led by KwaZulu-Natal Community Safety MEC Willies Mchunu, had been meeting daily to address the the unrest.

“Lots of local people, who are Africans are coming from places like Umlazi to donate food, blankets, mattresses and clothes. These are people with wisdom, knowledge and understanding. They have shown support to refugees who are displaced here.”
said-Stephen Mwale the Malawian High Commissioner and leader of his country’s people in the Chatsworth refugee camp, told former UN high commissioner for human rights Judge Navi Pillay.

South African society has voted with an overwhelming “NO” to Xenophobia

South African society has voted with an overwhelming “NO” to Xenophobia.

Gift of Givers-SA reports: In the light of the generous outpouring of support we will distribute R1 million rand in supplies to the camps at Isipingo, Chatsworth, Greenwood Park, Phoenix and Verulam. 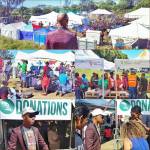 “South African society has voted with an overwhelming “NO” to Xenophobia, coming out in full support for foreign nationals who they regard as fellow brothers and sisters. The messages of support, request for bank details, efforts to set up fund-raising campaigns and events, offer of medical and general volunteers and a desire to prepare cooked meals and donate items in kind has been absolutely sensational, heart warming and so, so satisfying.”

Along with the Presidents visit to KZN and the government funds allocated to the victims, countless other companies, foundations and civilians have joined in the efforts with funds and blankets, volunteers, food, toothpaste, sanitary pads, diapers, clothing etc.

You can also watch President Zuma’s full speech condemning the violence at: http://www.news24.com/…/Watch-Jacob-Zumas-full-anti-xenopho

You can support some of these efforts with :

The Ntenga Foundation: Donation drop off at Beria Center, shop 22a (Me Tym Salon)

The Zimbabwe Business Network through the Zimbabwean Consulate: Donation drop of at 13 A Boeing Road, Befordview, Johannesburg.

Friend to IMBIZO and South African based in New York and currently in SA has partnered with Red Cross to help South Africans abroad contribute:
https://www.indiegogo.com/projects/africa-for-africans–3

Donations will also be collected at the various Freedom Day events taking place next Saturday across the United States.